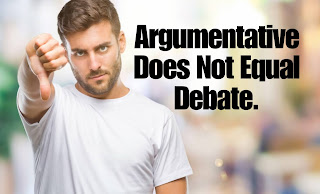 Argumentative people... don't let them in. Someone didn't pay enough attention to them as a child, it's not your job to do it now. It's their job to grow up. If they refuse to mature their mind let them go and let God lead.

They may react badly at first by talking about you with others as they express their masked anger as innocence and simply act as if you're the issue. Ignore them. It's all you can do. If you take them on then you take on their arguments and then who wins? They do, because you will be joining their fight. Instead

recognize their demons and destroy their power by not taking on the strife. Eventually the person will see their ignorance and either apologize to you or accept that you were right to cut them off.